The blank page and space
The blank page is as vast as a desert, as pure as the snow, as receptive as a freshly tilled land. It has the power of the utmost receptivity.
It can express everything,  the most careful stroke or the wildest one, the most extravagant moods or the most refine emotion. All forms of writing, all signs, all forms of music. A blank page may seem limited but it suggests, by its sheer vacancy, infinity. It is the all encompassing emptiness.
The slow development of paper

Remember that the paper was invented by the Chinese, around 107 AD, some say by T'sai Lun, a court official of the Han dynasty (25-225 AD)
The Arabs, victorious at Samarkand, learnt from their Chinese prisoners how to make paper from rags. This secret then trailed along a "paper route" towards Japan, Central Asia, Persia and North Africa.
One of the earliest Western paper mills was built in Spain around 1150, a thousand years after it first emerged in China.
Since then, China and Japan have been producing a wide variety of papers based on blackberry bark, rice chaff, bamboo leaves or kelp, ranging in hue from the purest white to the deepest ochre.
A windoow opening on the world 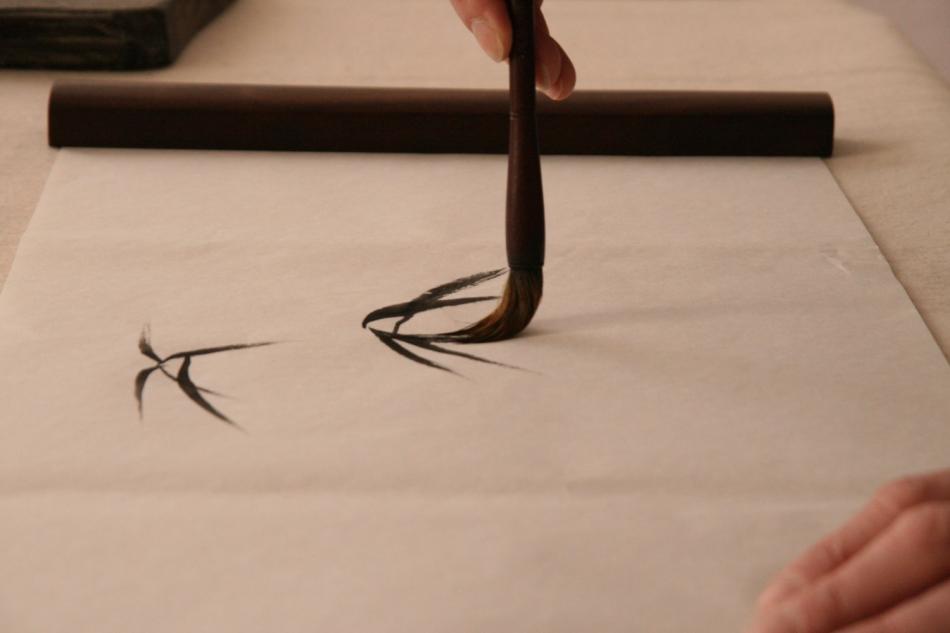 "Before you can start painting, you need an expense of white"
(Lun Yu VII, 6.)
Paper is a basic law of life.
It represents both total receptiveness by the whiteness of the page and a delimitation of the strictest boundaries by its edges.
It prefigures a totally receptive silence.
This blank silence will bear the imprint of the paintbrush's language and that of the ink. The Chan painter attaches great importance to blank spaces, the emptiness to be preserved.
It is not possible to express something on a surface already covered by signs.
It would be presumptuous to invade the free space of the sheet of paper.
It is this space which makes it possible to reveal an unencumbered language.

It is often referred to as if imbued with the character of the artist: fiery, undisciplined, audacious, whimsical. The master calligrapher holds his brush as he governs his spirit: with ease and freedom. He can make it caper on the mountain tops and tickle the clouds. It follows the noble line of the intertwined tree trunks, the slope of the hills and the curve of flower stems. The brushstrokes are as fine and regular as silk threads or as rapid and tumultuous as a flock of swans taking to wing. 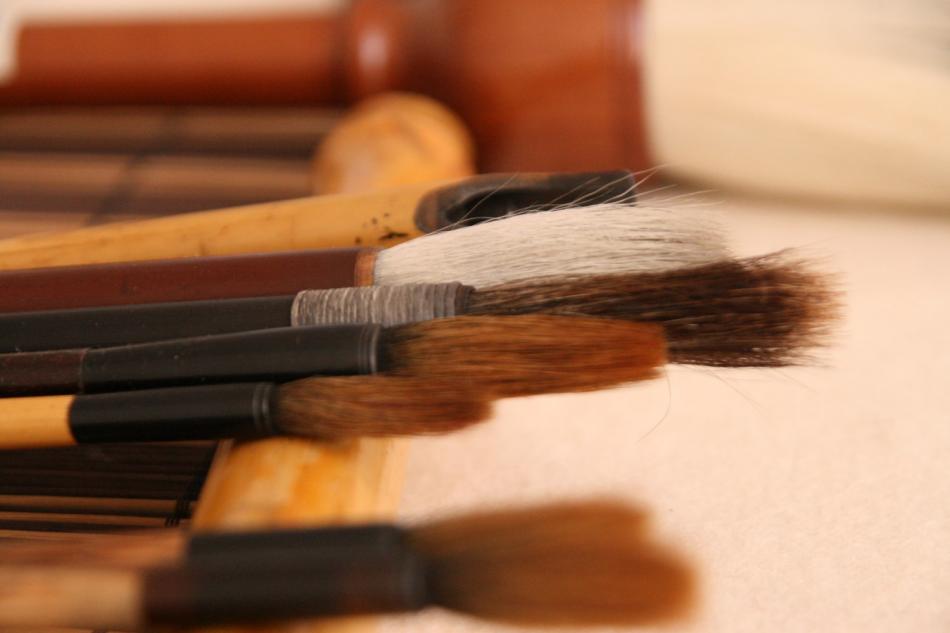 The early brushes
In the East, one single instrument is used for painting, drawing or writing.
Whether big or small, as thick as a brush or as fine as a needle, the tufts of bristle mounted on a bamboo handle go back to the very beginning of calligraphy itself.
The earliest known examples were made of camel hair, then rabbit. Later, sheep and goat hair showed more flexibility. To paint bamboo or orchid leaves, tougher bristle of fox, wolf or pine marten are recommended.
Further refinements in developing brushes continue to this day, making all forms of creativity possible.
The foremost criterion for a quality brush is the tip. Only a fine tip enables the artist to draw a supple, regular line. Brushes should never be left standing in water as the bristles will rot. They should be thoroughly rinsed and hung to dry with the bristles facing down. The price of a brush can vary, in all currency, by a factor of a 1000 depending on its quality. 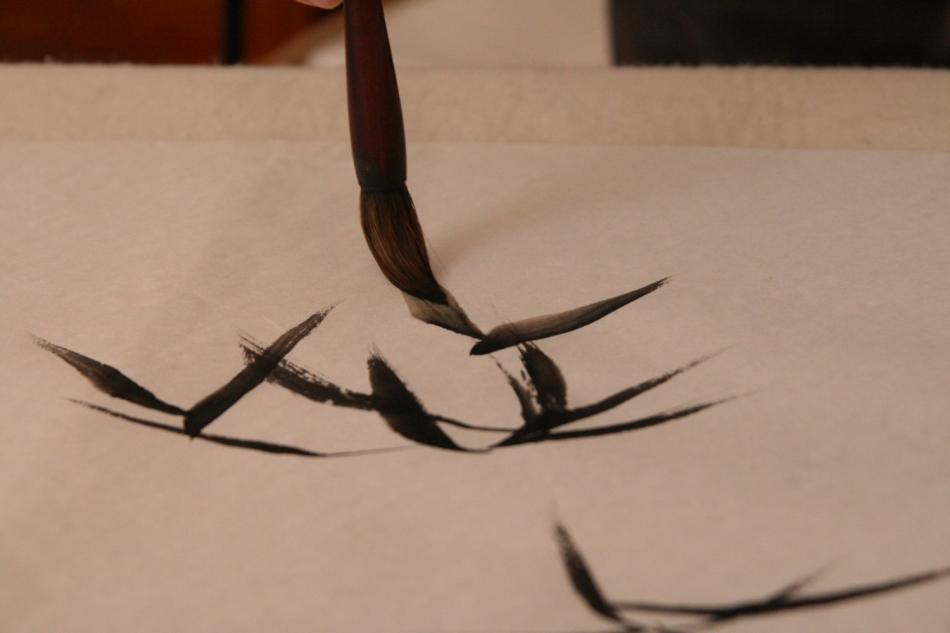 The language of the brush
The brush imparts movement, dynamism, energy, from the most consistent movement to the most subtle, deliberate or the most spirited or lightning-quick stroke.

"It is the link between the energy of the stroke
and the silence of the blank sheet of paper."
Ink is the chaos.
Many people think that black is not a colour.
Chinese and Japanese painters say that it contains all colours and all relief - depending on the skill of the painter.
Movement leaves behind a trace due to the ink on the brush.
This trace is indelible, final and you cannot undo it nor change it.
It is an unnerving moment when the infinite possibilities become definitive through the act of creation. 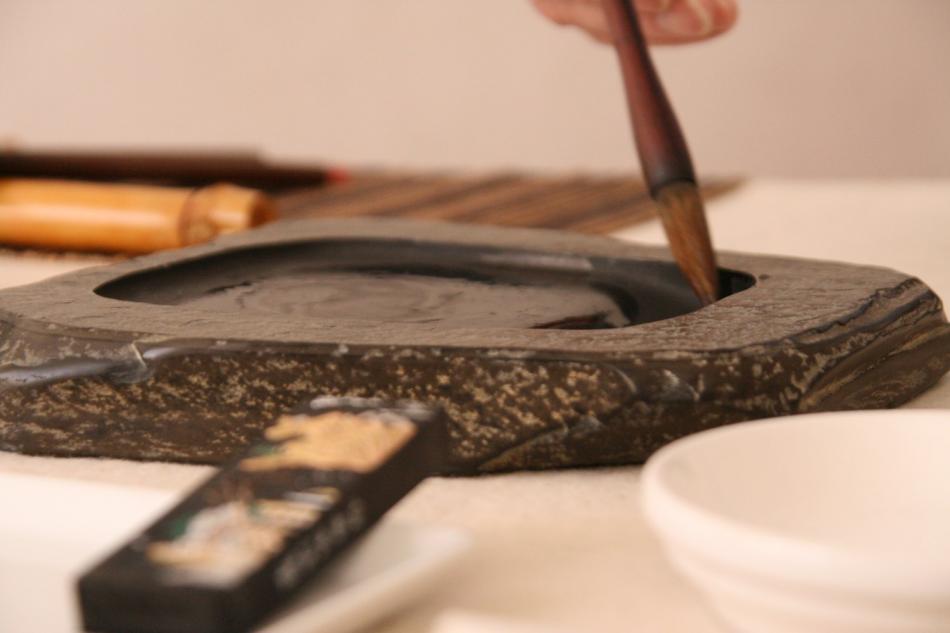 According to tradition black ink contains the yin principle, darkness, earth, water, suppleness, the feminine.
It is a material composed of two paradoxical elements, water and fire.
The burning wood fumes mingle with water to produce it.
So ink is not a colour but a pigment composed of thousands of particles in suspension.
Billions of possibilities are forged out of chaos in the humble stone ink pad or calligrapher ink stone.