The School of Dragon proposes the discovery of T'chan and Sumi-e painting and to accompany the student's progression by direct and adapted teaching.
What ever the level of experience the student might have (graphic techniques, oil painting, water colours.) or the knowledge of art the T'chan and Sumi-e styles demands a totally different apprenticing.
In addition to the techniques of Chinese ink the Sumi-e approach requires:
- Prioritising “self knowledge” over “know how”
- The elaboration of a harmonious synthesis between western culture and asian thinking, the origin of the art form.
- An exercise in modesty while developing high standards
In order to reach these objectives, the dragon school has developed methods to accompany the students by: 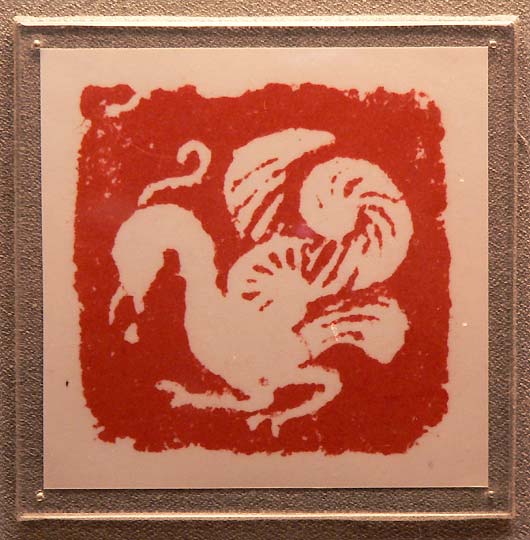 - Adapting the difficulties by stages, progressively in the traditional fashion.
- Giving priority at the same time to autonomy and independence.
- Reunite by our teaching methods technical competence, a sense for aestheticism and the waking of a spiritual sensitivity.
The Spirit
Our teaching methods are not only based on multiple technical or aesthetic aspects but also and especially the acquisition of the spirit or the frame of mind of that painting style.
We would like to teach westerners the 3 values of Tch’an and Sumi-e  painting: Ease, force and humility
In that frame of mind, we are all students and we follow the classic schools of appreciation of painting according to the six criteria of Xi-Hi. (See section “Tradition and technique in painting")
The student painters lean to discover their own interior force and at the same time their fluidity of thought. They discover the gentle energy of patience and the determination and assurance of their movement.
They progress in simplicity and are transformed little by little by the beauty that they create.
The students are progressively divided according to their levels of competence and seniority, each is invited to carry out the proposed techniques which are most often shown, in relation to their level.

The Major Oriental Schools
Today, despite the stereotyped paintings proposed to tourists, the art of calligraphy and the ink painting still draws its sources from its immense history and remains very much alive today.

In the Major Schools, that art continues to propose a method with several echelons: technique, aesthetic, philosophic and sometimes spiritual or initiatory by following the work of a master or an expert known as "a living treasure in Japan.

Robert Faure reminds us that within the framework of the Academy of fine Arts of Hangzhou in China, in order to pass the diploma and practise professionally one must consecrate 3 years studies in pure calligraphy and a further 4 years specialisation in painting.

Without wanting to reach such a demanding level of excellence which would necessitate the investment of several years of ones life, the Dragon school proposes courses based on 20 years of education, exchanges with painters and calligraphists both Asian and from the west in a program spread over and accompanied by nine precise stages.

The program, divided over several years according to the student's possibilities, has the advantage of being adapted to our comprehension and western practises.

It progressively marks the technical progress of each person going from the simplest to the most complex without forgetting to deepen the historical knowledge of the civilisations that have brought the art of T'chan and Sumi-e to its height of perfection.

To begin it is not necessary to know how to draw or to paint only to accept to be followed during the exercises which are comprised of tracing and simple lines which allows one to gain ease and firmness by correctly holding the brush. Little by little the breath and the respiration accompany the dexterity of the movement with the body’s complete participation.

We then approach the 4 basic subjects recognised by most traditional schools which we call the 4 gentlemen: Orchids, chrysanthemums, plum blossom and bamboos.
These 4 essential subjects allows one to acquire the techniques and the basic attitude which will permit the student to achieve more elaborate subjects such as the infinite variety of landscapes.

The learning of a movement without fear, without retouches necessitates an interior arrangement, total peace, a taste for the rich and unique moment where the apprentice receives the powerful momentum of creation.
The paint does not necessarily provide something more, but gives us something less; less clumsiness, less indifference in our eyes, less pride in fleeting successes.
It has revealed for centuries, admirable prophesies of beauty.